SIDNEY – In early November, 22 Sidney students attended Heart of New York Teen Institute, a statewide youth empowerment program established in 1986 to foster the skills needed to lead a life free of alcohol, tobacco and other drugs.

This marked the third year Sidney students attended, school officials said, bringing the total of local participants to 45. Each year, administrators noted, that number has increased.

Attendance of the four-day program in Speculator, New York was facilitated by individual donations; the Tri-County Coalition on Substance Abuse and Prevention, Sidney United Way and Sidney Alumni Association; and district contributions.

“We had so many kids that wanted to attend, we had to put an application process in place,” he said. “We developed a local application to see who would best fit the experience.”

“Initially, the district was going to sponsor 10 students,” Bullock added, “and people were extremely generous with sponsorships. We want this to be a sustainable thing.” The per-student cost of Teen Institute attendance is $200.

“It’s not necessarily at-risk kids that go,” COSAP President Lorraine Keckeisen noted, “but children that demonstrate leadership or a need to be involved. Then, (selection) is based on the needs of the children as well as their ability to apply themselves in situations where they can build self-esteem and grow.”

For participating kids, the experience is often described as “life-changing” and “eye-opening,” with far-reaching effects.

“We had another amazing experience at Teen Institute,” Jonathan Yurka, Sidney Students Against Destructive Decisions adviser, said. The majority of Teen Institute attendees, he noted, are also SSADD club members.

“Be sure to pick up this week’s edition at a store near you! Or for the latest local news, call or e-mail us today to arrange convenient home delivery each and every week.” 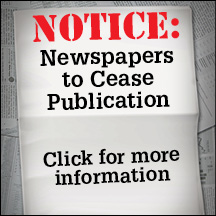